Guerrilla fighters in Myanmar have set a military base alight in a blow to the ruling military junta.

Ethnic Karen guerrillas said on Tuesday that they had captured the base near the border with Thailand.

The move is a morale boost for those opposing the military’s takeover of the country’s civilian government in a coup in February.

Video shot from the Thai side of the border showed flames rising from the government position on the banks of the Salween River, amid the sound of heavy gunfire.

The river marks the border with Thailand, where hundreds have been evacuated from a nearby village for their own safety, a Thai official said.

The military, known as the Tatmadaw, responded with force several hours later by carrying out air strikes on villages in the territory controlled by Karen forces, according to a guerrilla spokesman, a senior Thai official and a relief worker.

The military junta said on Tuesday that it would heed regional pleas to stop violence only when the country ‘returns to stability’.

The nation has been in turmoil since the military ousted civilian leader Aung San Suu Kyi in a February 1 coup, triggering a protest movement that security forces have met with deadly crackdowns.

The violence – in which more than 750 people have been killed by security forces, according to a local monitoring group – has raised alarm among regional neighbours and drawn criticism from the international community.

A spokesman for the Karen National Union, the minority’s main political group seeking greater autonomy from Myanmar’s central government, said its armed wing had attacked the base and burned it down just after dawn. 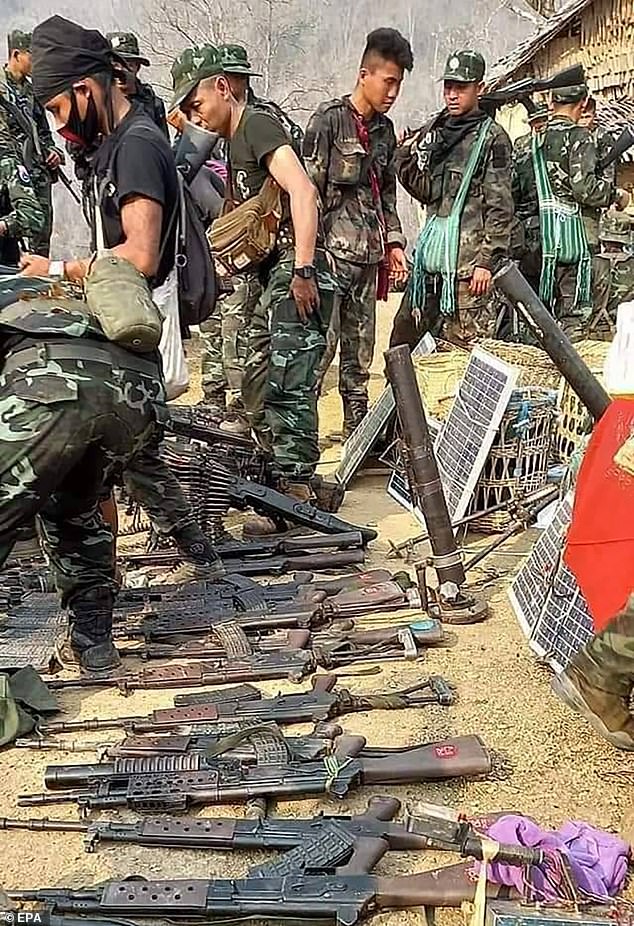 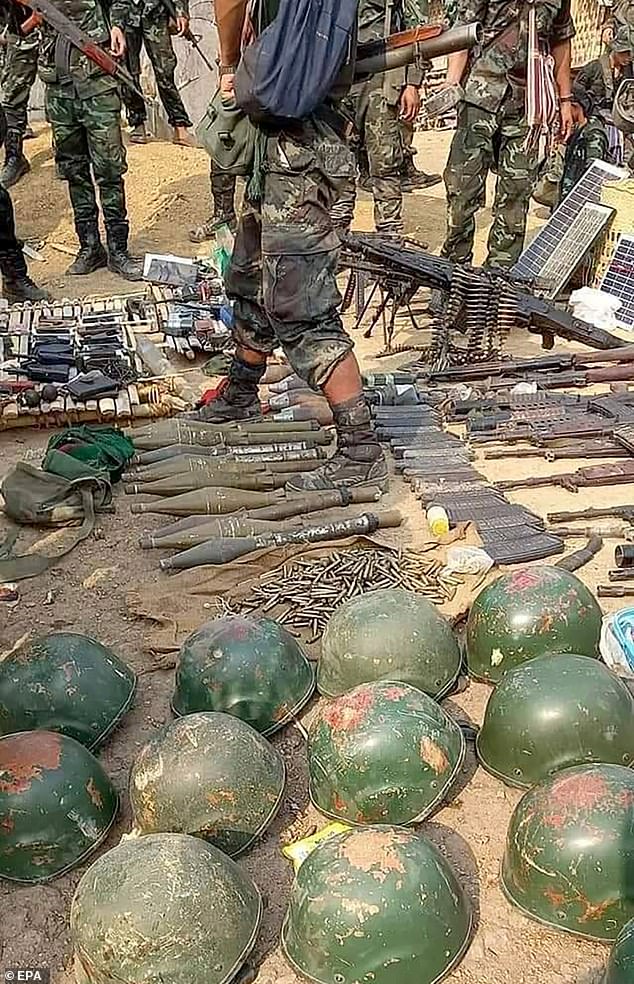 The KNU, which controls territory in eastern Myanmar near the Thai border, is a close ally of the resistance movement against the February coup. Its armed wing is called the Karen National Liberation Army.

A report by the Karen Information Centre quoted an unnamed villager on the Thai side of the border saying he saw seven government soldiers trying to flee the camp, which is opposite Thailand’s Mae Sam Laep village.

Padoh Man Man of the KNLA’s 5th Brigade, which launched this morning’s attack, said Myanmar’s military carried out airstrikes in the early afternoon, but he did not know how many casualties there were.

He described the air raids as a ‘heinous war crime’ and called for the international community to pressure the junta to stop the,.

Sithichai Jindaluang, governor of Thailand’s Mae Hong Son province, confirmed at a news conference that Karen guerrillas had overrun the Myanmar base.

He said a stateless woman on Thai soil had been shot in the leg by a stray bullet during the fighting and that she was treated in hospital and is now in a stable condition. 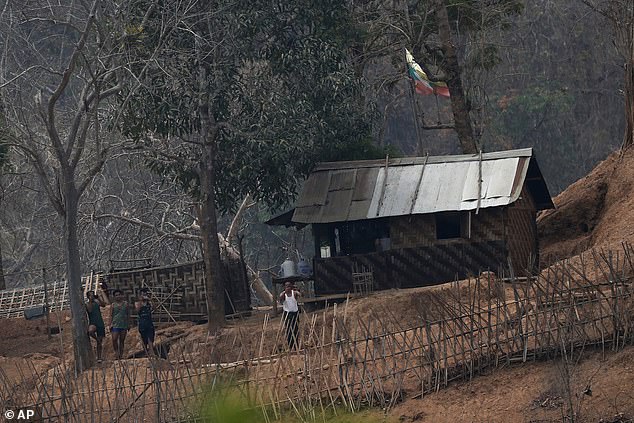 Ethnic Karen guerrillas said that they had captured the base near the border with Thailand on Tuesday. Pictured: Myanmar soldiers are seen at the base on March 30 [File photo] 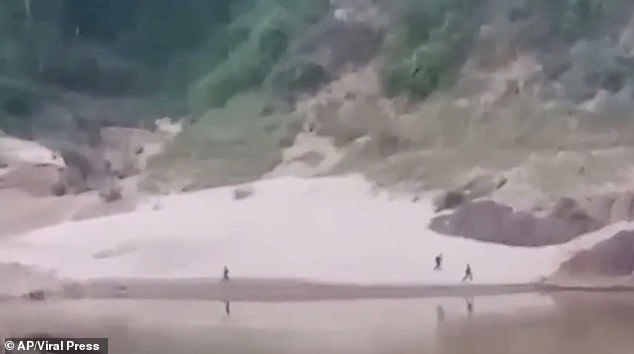 Sithichai added that about 450 villagers have been evacuated from Mae Sam Lap for their own safety.

He also said that a Myanmar military aircraft later bombed a Karen village.

‘Thailand does not support either side but concentrates on ensuring the safety of Thai nationals,’ said Sithichai, whose province has also devised a ‘refugees management plan’.

Some villagers on the Thai side of the border had already fled their homes, said Hkara, an ethnic Karen longtime resident, adding that she heard explosions and gunfire from inside Myanmar around 5 am.

‘Nobody dares to stay,’ she said.

Dave Eubank of the Free Burma Rangers, a humanitarian aid group, said he could confirm there had been air strikes on Karen villages in two townships in Papun district.

He said Myanmar’s army was also staging ground attacks in the area. Neither he nor the government had casualty figures available. 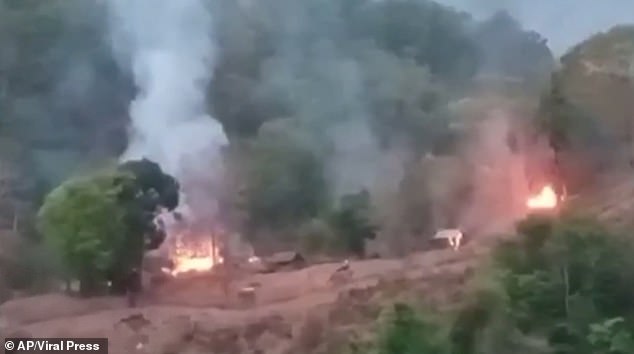 Video shot from the Thai side of the border showed flames rising from the government position on the banks of the Salween River, amid the sound of heavy gunfire

Fighting between the KNU’s armed wing and Myanmar’s military has been intense since February, with government air strikes beginning on March 27.

Jets have bombed and strafed Karen villages, and its army has deployed fresh battalions to the area, in possible preparation for a large-scale offensive.

Up to 25,000 villagers have fled their homes and are hiding in jungles and caves, according to Mr Eubank.

In response, the KNLA has kept up guerrilla attacks on Myanmar patrols and bases.

The KNU has also given shelter to at least 2,000 activists against military rule who have fled the government’s crackdown on the resistance movement in Myanmar’s cities.

There is a similar situation in the country’s north, where the Kachin minority claims to have captured several government outposts and to have been the target of air attacks.

The Karen and the Kachin are two of the larger minority groups that have been seeking greater autonomy for decades, during which there have been periods of armed conflict punctuated by ceasefires. 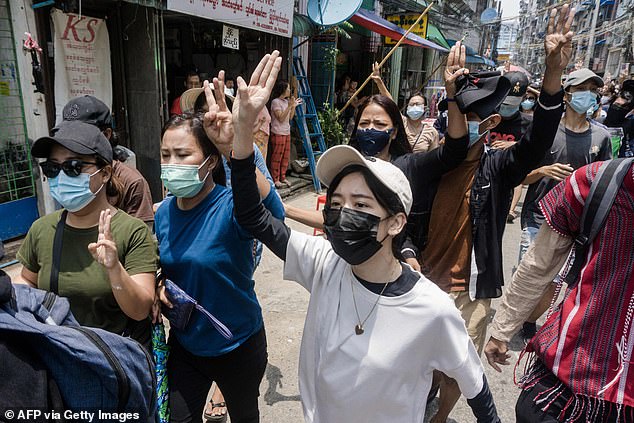 Myanmar has been in turmoil since the military ousted civilian leader Aung San Suu Kyi in a February 1 coup, triggering a protest movement that security forces have met with deadly crackdowns. Pictured: Protesters in Yangon on Tuesday 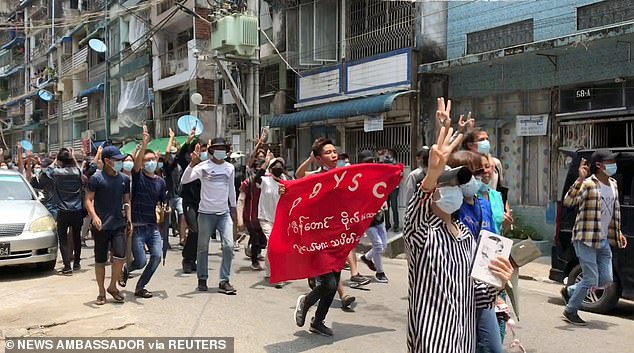 The violence – in which more than 750 people have been killed by security forces, according to a local monitoring group – has raised alarm among regional neighbours and drawn criticism from the international community. Pictured: Protesters in Yangon on Tuesday 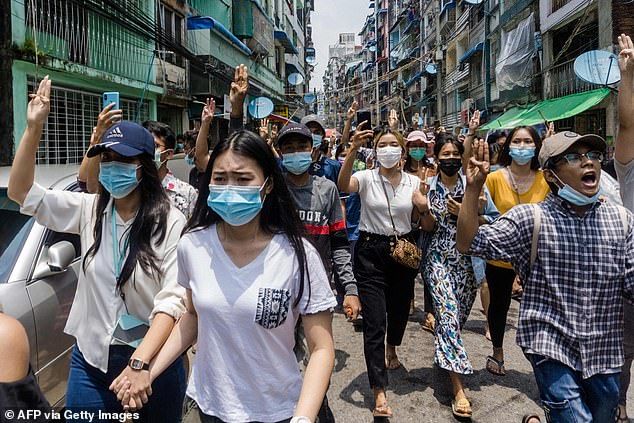 Junta leader Min Aung Hlaing attended a weekend meeting on the crisis with the leaders of the 10-country Association of Southeast Asian Nations (ASEAN) – his first overseas trip since he seized power.

The leaders issued a ‘five-point consensus’ statement that called for the ‘immediate cessation of violence’ and a visit to Myanmar by a regional special envoy.

However the event held in Indonesia was criticised by many who saw Min Aung Hlaing’s presence alongside other leaders as a legitimisation of the military’s power grab.

Myanmar politicians who have formed a ‘National Unity Government’ called on Interpol and the Indonesia police to arrest the Tatmadaw leader upon his arrival in Jakarta, for crimes against humanity.

On Tuesday, Myanmar’s State Administrative Council – as the junta dubs itself – said it would consider the ‘constructive suggestions made by ASEAN leaders when the situation returns to stability in the country’.

The statement also said its neighbours’ suggestions would be ‘positively considered if it (ASEAN) would facilitate the implementation’ of the junta’s five-step roadmap. 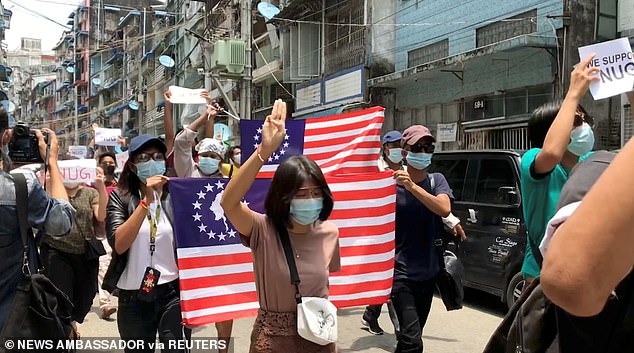 The three-fingered salute has been adopted by pro-democracy protesters across Asia. Pictured: Demonstrators in Yangon on Tuesday 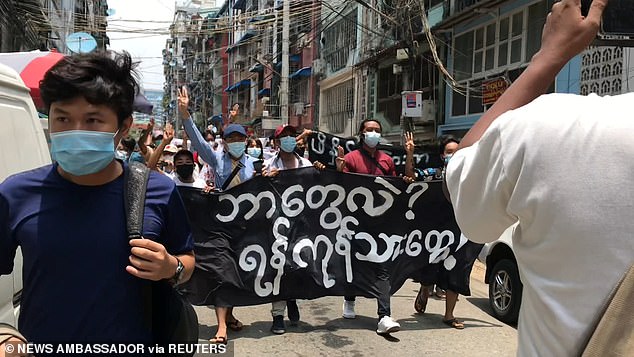 Demonstrators carry a banner reading ‘Wo are we? We are Yangonese!’ during a protest in Yangon on Tuesday 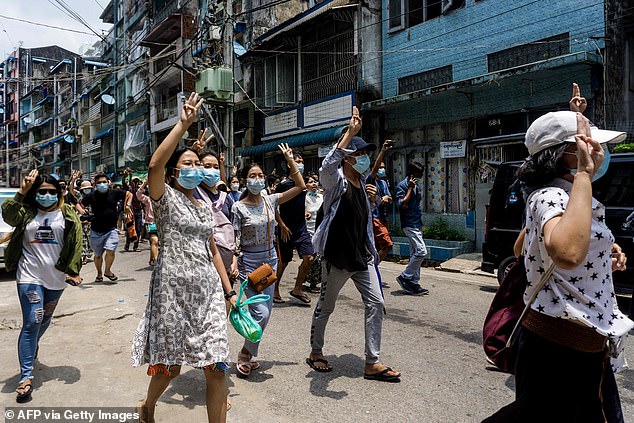 In Yangon on Tuesday, hundreds  participated in one of the biggest demonstrations to hit the commercial hub in weeks

Junta spokesman Zaw Min Tun told AFP news agency that the regime was ‘satisfied’ with the trip, saying it had been able to explain the ‘real situation’ to ASEAN leaders.

But ASEAN is not known for its diplomatic clout and observers have questioned how effectively it can influence events in the country.

The former US ambassador to Myanmar, Scot Marciel, warned that the military’s response to the Jakarta summit showed signs of backsliding already.

‘ASEAN cannot dither here, as the junta moves to walk back even the limited agreement reached Saturday,’ Marciel said in a tweet.

‘There should be urgent follow-up, and costs imposed on the junta for delay.’

There have been near-daily protests throughout the country calling for the military to step down.

Across Myanmar, security forces have killed more than 750 civilians since February 1, according to the Assistance Association for Political Prisoners, a local monitoring group tracking the death toll.

But the junta – which called the AAPP an ‘illegal organisation’ – has registered a far lower number while blaming ‘rioters’. 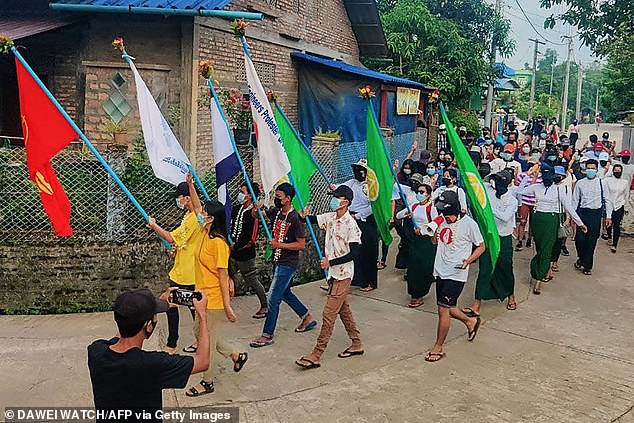 Protesters march against the military coup in Dawei, a city in southeastern Myanmar, on Tuesday 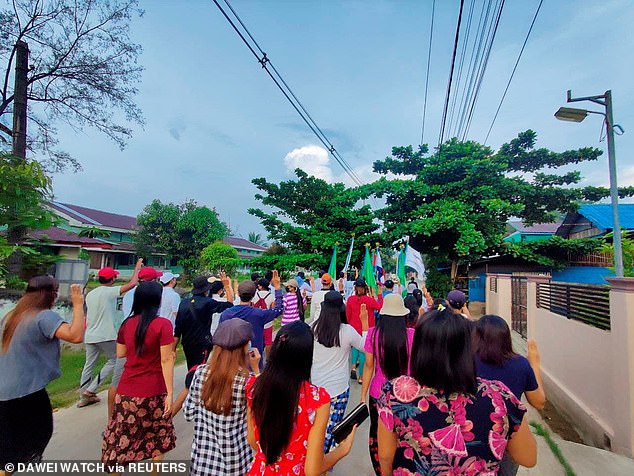 Engineers and students march during a protest agains the military coup in Dawei on Tuesday. Since the February 1 power grab, Myanmar has seen near-daily protests despite bloody government crackdowns

Min Aung Hlaing’s weekend trip to Jakarta has failed to halt the use of lethal force by soldiers and police – with a teashop owner shot dead during protests in Mandalay two days after the get-together.

Tuesday also saw tensions in eastern Loikaw city, when security forces tried to remove barricades and opened fire on residents who tried to stop them – killing one.

But the violence has done little to deter the anti-junta movement.

In Yangon on Tuesday, hundreds participated in one of the biggest demonstrations to hit the commercial hub in weeks.

‘Democracy is our cause, our cause!’ they chanted as they wove through the city’s narrow residential streets in a flash march to avoid any potential confrontation with security personnel.